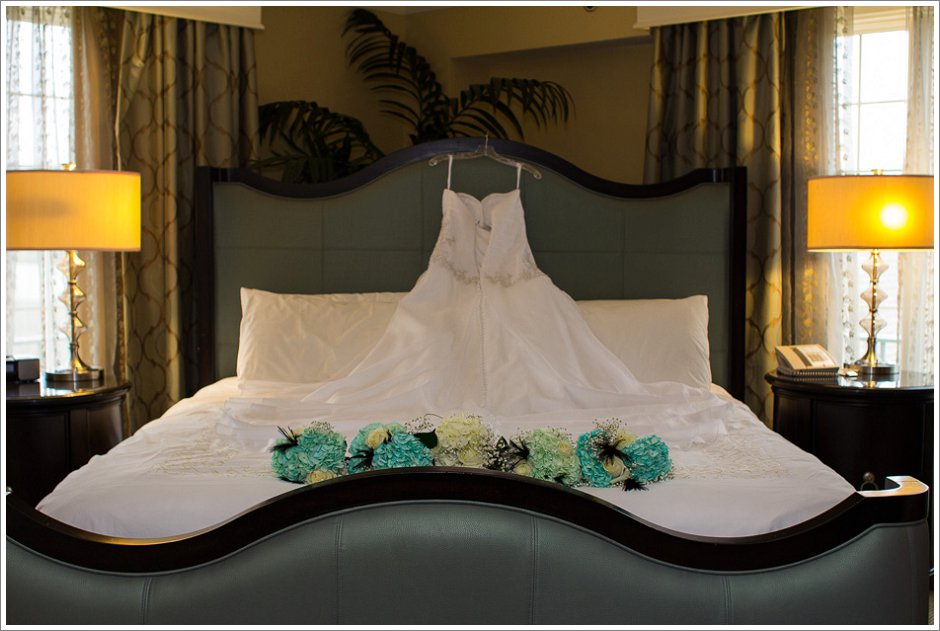 It was a cool, rain-threatening February day in 2015 as we arrived to photograph the Chateau Elan wedding of one of the nicest couples, Heather and Josh, that we’ve had the pleasure of working with.

And while this wedding venue is elegantly beautiful, there really isn’t a great place to hang the dress for wedding dress photos, at least not in the traditional since. I’m sure you could find a good place somewhere on the grounds but this place is humongous with lofty ceilings and we didn’t notice a good place to hang it in our immediate vicinity.

So…. we had to improvise. We laid the dress out on the bed there in the bride’s room and added the bouquets in front. We thought the “hanging” wedding dress picture turned out quite nice.

On the way down to the main lobby to take some more photos, the bridesmaids looked up at the reflective elevator ceiling and decided to have a little fun with an upside down, reflective photo.

In the main lobby area there is a graceful set of stairs leading up to a balcony that overlooks the lower floor of the lobby. It was a fun location for having the bride and groom in the same photo but still adhering to the tradition of not seeing one another before the ceremony.

We placed the groom down below first and had him turn his back toward the balcony. The bride got off the elevator on the floor above and when we were ready she walked out onto the balcony overlooking the backside of the groom below.

The photo on the right is a picture of the couple’s first dance together as a married couple. 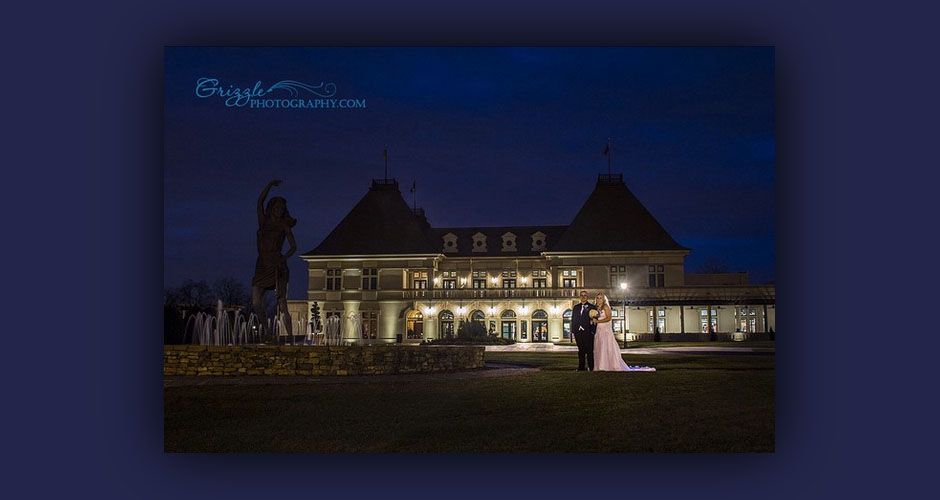 By the time the ceremony was over and the family photos were done it was dark, cold and drizzling rain outside. But you can’t get married at Chateau Elan without getting at least one photo in front of the famous Chateau Elan Castle.

This photo wasn’t without its difficulties however, above and beyond the non-cooperating weather I already mentioned. There was a steady flow of traffic and pedestrians going to and fro right in the middle of our shot. And at first we tried lighting the couple by adding a second, off-camera flash up close to the couple but for whatever reason the wireless trigger would not work.

So, we ended up abandoning the second flash technique and we went with a double exposure technique, first properly exposing the photo for the background, and then taking a second photo properly exposing for the couple. We finalized the image by combining the two separately exposed photos together in post to create one gorgeous image.